Over a year ago, a good friend of mine gave me his old Late 2008 13-inch MacBook. It is one of these beautiful unibody aluminum machines, that look like the later 13-inch MacBook Pros. I have considered it too nice to throw it away, so I bought an SSD and upgraded the memory. This is still possible on these old MacBooks. Another necessity was to buy a new MagSafe Power Adapter. Then I was ready to go. It is pretty amazing that a nearly ten year old computer still works.

Some things prevented me from using this computer on a more regular basis. That is, for instance, the version of OS X — it is not even macOS — that is officially supported on this machine. Although the Late 2008 MacBook runs OS X 10.11 “El Capitan”, which still receives updates from time to time, the newest release of Xcode needs at least macOS 10.13.2 “High Sierra”. And as an hobbyist iOS developer — it doesn’t pay any bills, for that reason I’m also employed as an iOS developer — I would like to have a machine capable of running a recent version of Xcode.

Other reasons are the weight and the size, as I nearly always carry my personal computer with me. Compared to a 13-inch MacBook Air (1.35kg, up to 1.7cm), it feels pretty heavy with its weight of 2.0kg and its thickness of 2.41cm. It also lacks a backlit keyboard, has a worse built-in iSight camera, no card-reader, an old battery, and so on.

Ne­ver­the­l­ess, Alex Repty wrote nearly an entire game on an aluminum MacBook in 2015 — it’s called Cosmos and I totally suck at it — and last year, Low End Mac published an “Ode to the Unibody MacBook”. So I guess, it’s still a good machine.

Back in 2013 I bought a 1st generation iPhone and used it for two weeks. It was an in­te­res­ting experience, I even wrote a couple of blogposts (1, 2, 3, 4, 4.5, 5, 6). Due to the fact that I limited myself I had to find new ways to do certain things: You want to listen to your music on Spotify? Okay, but you can’t do anything else then. You want to take pictures? Well, take this 2MP camera.

Although everything worked out pretty well, it was a time consuming experience: The “wi­de­screen iPod with touch controls”, the “re­vo­lu­tio­na­ry mobile phone” and the “bre­akth­rough Internet com­mu­ni­ca­tor” felt quite slow in 2013.

Now I want to repeat this with a ten year old computer: I want it to be my main machine for the next three weeks.

To do so, I wanted to get rid of as many obstacles as I could. I couldn’t change neither weight nor size. Luckily, a friend pointed me to a tutorial on how to install macOS 10.13 “High Sierra” on an un­sup­por­ted Mac, so I could at least fix that. I installed “High Sierra” yesterday and everything went sur­pri­sin­gly well. Now my Late 2008 Aluminum MacBook, that doesn’t run High Sierra, runs High Sierra: 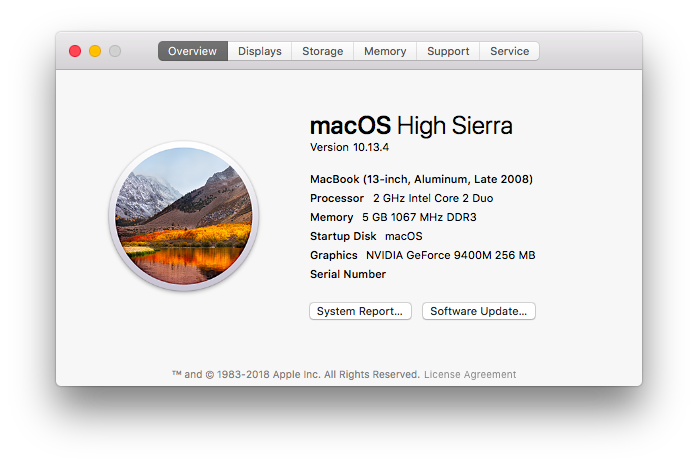 I use my computer for developing software (mostly apps for iOS), writing blogposts (like this one), recording a podcast, listening to music, writing tweets — as long as I can use a third-party twitter client — and other kinds of com­mu­ni­ca­ti­on. I don’t plan to build a whole video game,it so I can’t really say, what will be different — probably not a lot. I’m going to need more time for certain things, I guess, but that’s okay.

I’m looking forward to the next couple of weeks and the experience of using a ten year old machine. Will it be frus­tra­ting? Will there be pain points? How many times will I have to switch back to the younger computer? Let’s see.